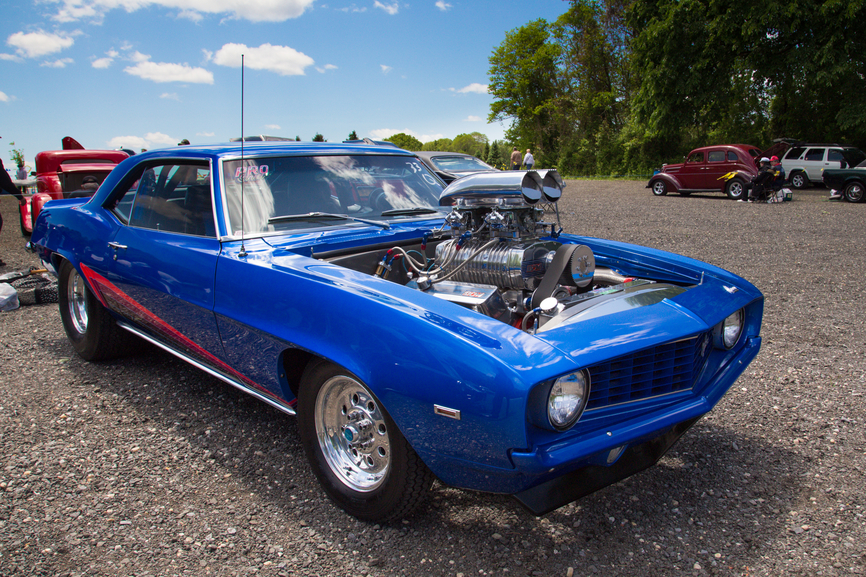 In the mid '60s GM had GTO and Ford had the Mustang but Chevy didn't have anything to match either of those soon to be legends. Then in '67 Chevy debuted the Camaro and a new king was crowned. The Camaro just took off in sales that even Chevy didn't expect. Suddenly there was a new sheriff and his name was Camaro. Soon you couldn't read a magazine, drive down the street or turn on your TV and not see a Camaro. The boulevard was just teeming with Camaros. The lines, the power and the performance of the Camaro were unsurpassed. You could get them with small blocks, big blocks, autos, 4 speeds, just about anything Chevy had to offer, you could get in a Camaro. The Camaro not only dominated on the streets but also the track and it didn't matter what the track was, whether it was the dragstrip or the road course, the Camaro dominated. Sure the Camaro was considered the baddest of the bad when it came to muscle cars but even though it was king of the street and track and in stock form it was nearly perfect, it could always be better. Now better in a Camaro is subjective but the stock radio is well, not that great. Sure you could use some cheap generic radio and have to hack into the stock dash to make it fit and it still sound crappy but if you head over to Vintage Car Radio you could find a killer radio system that fits and rocks! They have the top manufacturers such as Antique Automobile Radio, Custom Autosound, RediRad, Radio Repro, Ken Harrison, Stereo Conversion and Out of Sight Radio. Vintage Car Radio will save you time and money and get your Camaro ready to rock even more!